You are here: Home / Features / Senior trio finds way to win despite odds

For ACU volleyball’s seniors Madison Hoover, Sarah Siemens and Jennie Loerch, the journey has been anything but consistent. However, through coaching changes, a transition to Div. 1 and player exits, one thing has remained the same for these three: Each other. 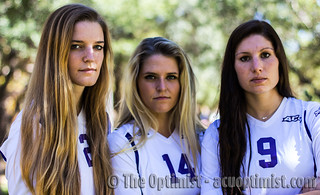 “We always like talk about that how like it’s been a hard four years here at ACU, but like playing with my best friends ever is like the best thing that’s ever happened,” Siemens said. “We’ve gone through so much us three as best friends, but also as like teammates. I couldn’t have asked for a better experience with Hoover and Jennie.”

One of the biggest changes the seniors experienced has been ACU’s transition to Div. I. During the Wildcats’ inaugural season they finished 6-18 and 2-12 in conference.

“Div. 1 players are just more physical, like bigger and they hit harder,” Loerch said. “In Div. II the tempo was faster and stuff like that, but in Div. II it’s more physical.”

Along with the move to Div. I came a coaching change and player flux as well as other issues. 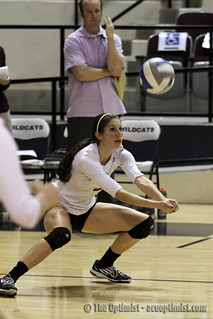 “We’ve gone through a lot like we’ve had 10 girls quit leave, we’ve had two different head coaches, two different assistant coaches, a transition to Div. I, but we’ve just kind of like never given up and we’ve kept working hard through all the different adversity,” Siemens said.

Although wins have not come as frequent as they would like the trio has stuck together, totaling more than 200 sets played together.

“It’s hard whenever you have to be a senior and be a leader and also be positive whenever we have gone through all our trials and tribulations,” Hoover said.

She said although it hasn’t always been easy the accountability with each other has been crucial during some of their lowest moments.

“To have those girls be my backbone and remind me like, ‘hey, you’re kind of being negative and the team doesn’t need that right now, and to just have them step up when I need them, they’ve just been my best friends,” Hoover said.

Despite this positive accountability and mentality, the 2015 season has produced its fair share of new challenges, including welcoming seven new players to the team but Loerch said this was a fairly easy transition. 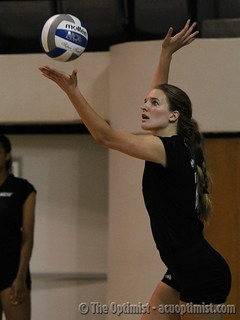 “They are all just great girls and like before they came the seven of us (returners) had a really special bond and we were all kind of worried about the freshmen coming in and ruining that, but they added to it and made it even more beautiful and cohesive,” Loerch said.

This cohesiveness has been critical to the Wildcats’ recent success. The Wildcats were picked to finish second from the bottom in the Southland Conference, but after a 4-2 start in the 2015 conference campaign and rank fourth overall in the conference.

“Everyone knows our preseason was super rough, like going 0-14 was really hard on my confidence, and I was just so scared when we got to conference,” Hoover said. “But we got here, and we’re 4-2 now and we are taking people out that we haven’t beat before.”

The first of these wins came against Northwestern State in the Wildcats home opener where they conducted a three set sweep.

“We had been like stressed out and freaking out about not winning a game yet and stuff and it was such a sweet moment to have that sweep and just have all our hard work pay off in the end,” Siemens said.

Many of the players have said one of the differences with this year’s team is the control and confidence they play with, as the Wildcats have been able to finish close games and matches unlike previous years. 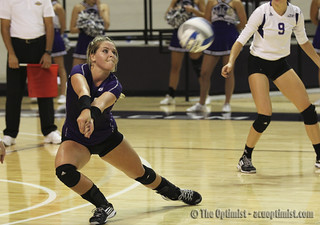 “When everyone is doing their job successfully and confidently so like our passes are on, our sets are on, our hits are on, we are just in control,” Loerch said. “And the other team, the beauty of it is it makes them start making errors and lose control.”

With 10 games left, this team and trio want nothing more than a conference title but they know as important as cohesiveness is on the court, it is magnified outside of volleyball.

“Well now that it’s my senior year and it is all ending I don’t think volleyball, I mean I’m always going to miss volleyball, but I think it’s just playing with my best friends Sarah and Jen,” Hoover said. “Coming in as freshmen and not knowing each other and somehow God placed us at this school to be together and now we are going to be best friends forever.”

You are here: Home / Features / Senior trio finds way to win despite odds

The Wildcats’ Western Athletic Conference tournament run and season came to a ... END_OF_DOCUMENT_TOKEN_TO_BE_REPLACED