You are here: Home / Sports / Wildcats use second half surge in second win of the year

The Wildcats’ 110th career matchup with the Howard Payne Yellow Jackets was closer than what the final score indicated. Both teams were able to keep within single points of the other before the Wildcats pulled away. ACU used a 20-2 run in the second half to take a firm lead in the game and would never give it up, moving to 2-0 on the season with the 70-56 win.

Freshman Jaylen Franklin had another strong outing for ACU in this one, as he did a lot of his damage from above the rim. In his first start for the Wildcats, Franklin led the team with 15 points on 7-11 shooting with three rebounds, three steals and three dunks. Senior Duran Porter added 13 points, six rebounds and two blocks against the undersized Div. III Howard Payne.

The Wildcats came out of halftime, trailing 33-29, and gave up five quick points to Howard Payne before the team would come to life. Senior Parker Wentz hit a pair of threes on back-to-back possessions to bring ACU within one, and then Porter added a dunk to give the Wildcats the lead at 39-38 and switch the momentum to the home team. Porter would add a big block to thwart the Yellow Jackets on their next possession. 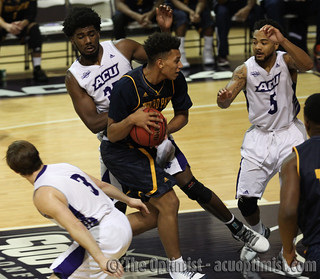 ACU put together a burst of points within a matter of seconds. Franklin continued the ACU push with an alley-oop dunk off an inbound pass under the basket. After a mental lapse by Howard Payne, the Wildcats got the ball back and found junior Jovan Crnic for a layup and the foul to make it 47-40 with 11:47 left in the 2nd half. The Wildcats continued to stretch the lead throughout the end of the game, finally finishing with a Franklin steal and fanatic two-handed dunk to put it away.

The first half consisted of sloppy play from both sides, with ACU recording nine of its 16 turnovers in the first 20 minutes, and Howard Payne turning it over 10 times in the first half and 13 in the second. The Wildcats were able to take several Yellow Jacket turnovers and covert them into points, recording 23 points on turnovers.

ACU held the lead in the first half before Howard Payne went on a 12-2 run to go up, 18-12 with nine minutes left in the half. The Wildcats would keep it close and even recover the lead after freshman Jaren Lewis hit two layups on consecutive possessions for ACU to make it 26-25 ACU with under three to go. The Yellow Jackets would hit two threes to go back up and grab the lead at the break.

Wentz and Lewis each recorded nine points. Wentz was 3-5 from beyond the arc and Lewis added a game-high eight rebounds and a block. Several Wildcats recorded multiple steals in the 13 steal team effort. Senior Jalen Little finished with three steals and a game-high eight assists as he was solid in keeping the ball under control in a turnover prolific game.

The Wildcats will hit the road for their next four games. They’ll leave to take on Portland in Oregon on Sunday, and will then travel to Fort Collins, Colorado to face Colorado State before returning home. From there, ACU will play a pair of games in Corpus Christi against Florida A&M and Oakland University.

You are here: Home / Sports / Wildcats use second half surge in second win of the year

The Wildcats’ Western Athletic Conference tournament run and season came to a ... END_OF_DOCUMENT_TOKEN_TO_BE_REPLACED