You are here: Home / Sports / Women’s basketball looks to strong upperclassmen for success

The women’s basketball team starts its 2015-2016 season this Saturday, November 14. It’s the second year in a row for the team to open its season at home against Wayland Baptist University. 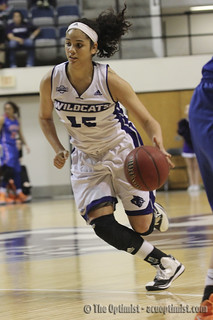 The women have a tough start to the season before starting conference play, capped by Big 12 teams Kansas State and Texas Tech. The Wildcats played both power house teams last year on the road, losing to Kansas State, 53-68, and against Tech, 44-61.

The team gained only three freshmen, but welcome back a group of familiar and talented faces. Junior Suzzy Dimba was named to the 2015-16 All-Southland Conference Women’s Basketball Second Team earlier this fall. She was the only post player honored on the team.

Last season as a sophomore, Dimba recorded 11.6 points per game, 8.6 rebounds per game, 2.6 steals per game and had 10 double-doubles.

The Wildcats also welcome back lone senior guard Whitney West Swinford who made the Southland Conference Commissioner’s Honor Roll and scored 39 points in two games vs. George Mason and the host Roos, going 14-for-29 from the floor (7-15 3-point range) with four rebounds, four assists, a steal and career high three blocks.

Other standout returners include juniors Lizzy Dimba, Sydney Shelstead and Alexis Mason. Dimba made the Honor Roll and ranked among the Southland’s leaders in points per game (10.8), rebounds per game (7.1) and free throw percentage (.732).

Shelstead made Third Team All-Southland Conference and was named player of the week twice last season. Mason is also among scoring leaders in the conference, averaging 11.3 points per game and 1.8 3-point field goals per game. 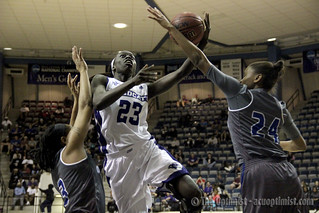 After the team travels to Kansas State on Monday, they will have a 3-game home stand, and will then be back on the road until New Years Eve, when they host Schreiner University.

They begin conference play in the New Year against Central Arkansas University, and finish up the season with another 3-game home stand.

You are here: Home / Sports / Women’s basketball looks to strong upperclassmen for success

The Wildcats’ Western Athletic Conference tournament run and season came to a ... END_OF_DOCUMENT_TOKEN_TO_BE_REPLACED