You are here: Home / Sports / Wildcats win on walk-off bunt to squeeze past Dallas Baptist

Despite a seven-game losing streak and wind-gusts of over 30 miles per hour at the Crutch, the Wildcats found a way to beat one of the top baseball programs in the nation in walk-off fashion.

The Wildcats 3-2 win over the University of Dallas Baptist was secured with one out in the bottom of the ninth inning when junior third baseman Aaron Draper laid down a squeeze bunt to score pinch runner Willie Harris from third base. The win moves ACU to 10-14 on the season and is arguably the Wildcats biggest victory of the year.

“That’s a big win for us and moves us in the direction that we want to go,” head coach Britt Bonneau said. “That’s a good team, they hosted a regional [game] last year so for us to beat them is huge.”

The Wildcats led 2-1 heading into the ninth inning looking for the final three outs of the game. As a team that is still struggling to finish ball games, things didn’t go according to plan. After getting a huge strikeout to end the eighth inning, junior reliever Zach Kornely gave up two hits and a walk to load the bases for DBU with no outs in the top of the ninth. 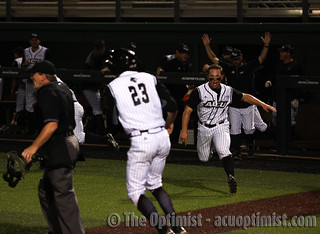 Kornely hit the next batter to drive in the tying run. Bonneau argued with home plate umpire Ron Daniels that the batter failed to make an attempt to avoid the inside pitch.

Freshman shortstop Mark Pearson turned a double-play on a line out hit right to him and then flipped it to second base to get the runner for two outs. Kornely struck out the next batter to keep the game tied heading into the bottom of the inning.

“Pearson made a really smart play with the ball to help us get out of that inning,” Bonneau said. “That was great job of us as a team not folding and rolling over, but continuing to fight and not relenting.”

The Wildcats got their next at bat started with a lead off hit to center field from pinch hitter Alex Check. Senior catcher Alex Copeland bunted Harris, who came in to run for Check, over to second base to get ACU into scoring position with one out.

A wild pitch from DBU advanced Harris to third base, and it appeared Pearson would drive in the runner. However, a great play from the Patriots freshman third baseman Tim Millard held Harris at third, but allowed Pearson to reach first.

Draper came up next with a chance to play the hero.

“I really wasn’t expecting to bunt,” Draper said. “I had the idea coming to bat and I ran it by coach and he said to go for it. Harris wasn’t expecting it at third base, so I’m glad he was ready and I’m glad I was able to get a pitch to square up on for a bunt.”

The Wildcats were led by one of the best pitching performances of the season from senior Nate Cole. In just his fourth start of the season, Cole was lights out, pitching 7.0 innings, allowing six hits, an unearned run, two walks and 10 strikeouts, tying his career high.

After ACU grabbed the lead at 2-1 in the fifth inning, Cole gave up three hits and struck out four batters in his final two innings of the game.

“Nate Cole really was just meant to go out there and give us four innings of solid pitching,” Bonneau said. “He was incredible tonight, he gave up some hits but he worked his way out of it and really showed maturity on the mound.”

The Patriots put together a rally in the sixth inning by getting two of their first three batters on base. With one out and the tying run on second, Cole used a perfect pick-off move and throw to second base to freeze the runner and get the big out. He ended the inning with a strikeout and a huge burst of emotion from Copeland behind the plate. 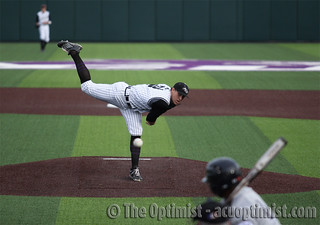 “He was the man tonight, but it was also nice to finally be able to back our pitchers up with our play behind them,” Draper said. “We’ve had some rough fielding games that we know we need to improve on. It makes you want to play that much harder when you know your pitcher is throwing great.”

The Wildcats tallied three runs on six hits against the DBU pitchers. All six hits were recorded by different Wildcats, as Copeland and Pearson each went 1-for-3. Draper drove in two runs, while freshman center fielder Hunter Markwardt also drove home a run on a chopper hit back up the middle that drove in the runner from third in the fifth inning.

Cole limited one of the best hitters in the country as part of his masterful outing. Junior first baseman Darick Hall came into the game with 11 home runs, 32 runs batted in and a slugging percentage of .767, but was ineffective against Cole. The reigning Missouri Valley Conference Player of the Week was held to a 1-for-4 game with a strikeout and a double-play.

As a team, the Wildcats turned three double-plays that quickly ended Dallas Baptist rallies. Two of those came in the top of the eighth and ninth innings, in key moments from Kornely and freshman Joseph Goetze.

“We’re still trying to figure things out as a team as far as guys we need to put in at certain situations,” Bonneau said. “We’ve had a lot of issues holding onto leads lately, but tonight we really showed something and it’ll help us continue to grow.”

You are here: Home / Sports / Wildcats win on walk-off bunt to squeeze past Dallas Baptist