The Wildcats came into this year with a challenge that far exceeded past years: to compete and achieve success at the Div. I level. As new members of the Southland Conference, ACU was quickly faced with new challenging and daunting tasks.

For the second year in a row, the Wildcats men’s basketball team would compete with a nearly entirely new roster with only two players returning from the previous year. As if that was not enough, the team would also face a ten-game road trip, that stretched all over the country, facing teams such as Xavier, Iowa, Texas Christian, Maryland along with many other top nationally ranked programs, to begin the season.

“It really is difficult to start the year on the road, especially with ten straight road games,” head coach Joe Golding said. “Our guys competed and played hard against some of the top teams in the nation.”

The challenging trip left the Wildcats with a dismal 2-8 record, but gained the program national recognition, as multiple games were broadcasted on Fox Sports 1, Fox Southwest and ESPN3. But with the looming trip behind them and living in hotel rooms in the past, the Wildcats finally returned home.

No team in the nation was happier to play at home than ACU. With a month of basketball on the road, the men’s basketball squad returned to the hill to play four games in Moody Coliseum. The Wildcats averaged 92 points and limited Hillsdale Baptist, Bacone College and Open Bible College to just 52 points averaged throughout the games. The much needed wins moved ACU to an early 6-8 record to end the 2013 calendar year.

Just eleven days into the new year, while most students were still on winter break, the Wildcats played in a double-overtime thriller against Southland rival Southeastern Louisiana which ended in a 85-77 ACU loss, but saw a combined 59 point outburst from junior guards Harrison Hawkins (29 points) and LaDarrien Williams (30). The game against SELU would be the final game of the season for Hawkins and Williams, as injuries and academic issues would sideline the stars for the Wildcats, and leave the team with two huge voids to fill. 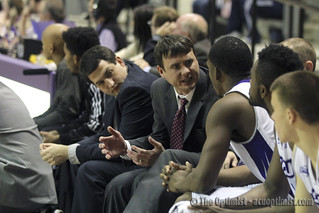 “With those guys gone, all of the sudden we have to find a new ball handler,” Golding said. “We had to move Parker (Wentz) to point guard, something he has never done for us up till then, so we weren’t sure what to expect.”

Golding along with his staff was faced with that exact question, with only a few days to figure it out. Sophomore guard Parker Wentz, who was a role player in his first year and expected to provide a boosts from the three point arc, quickly took over duties as the new starting point guard. Junior guard Julian Edmonson, who averaged just 12.3 minutes per game, saw his time on the court increased to 25.6 minutes per contest for the remainder of the season. The burden of the offense would fall to Edmonson and Wentz.

The Wildcats would face a tough challenge when the University of Central Arkansas came to Abilene. Trailing the majority of the game, ACU ignited into a furious comeback to make it a one possession game with less than a minute left. Free throws by sophomore Austin Cooke would tie the game with 21 seconds left to play and the ball belonging to UCA. On their possession, UCA drove the ball to the rack and scored on a dunk with 4.4 seconds remaining. Wentz would inbound the ball and go on what would be later called “the dash” as he drove the ball the entire length of the court, put up a lay-up to have it called but ruled a goal-tending violation, giving the Wildcats a frantic 73-72 win. The win was ACU’s first Southland Conference win of the season, and first since 1973.

“In that final timeout, I just told them to box out and remember how we lost the game against SELU on a last second tip in,” Golding said. “They scored and I tried to call a timeout, but the refs didn’t catch it. Next thing I know, Parker (Wentz) is taking the ball all the way down and winning the game. It’s something I’ll never forget.”

Two games later, ESPN3 came to visit ACU, as it was the first nationally televised game ever to be shot at Moody Coliseum. The Sam Houston State Bearkats, one of the elite teams of the Southland, would face ACU as the Wildcats looked to continue their momentum from a great game against UCA. 1,500 fans packed Moody Coliseum, as the student section provided a true home-court-advantage for the Wildcats. After hanging in for as long as they could, the outmanned and overmatched Wildcats would fall, 51-70.

The lack of a deep bench was a key factor that plagued the team for the majority of the season. With Hawkins and Williams out, followed by an injury to junior big man Alexsander Milosavljevic, the Wildcats found trouble in finding viable options to put on the court. Wentz averaged 30 minutes a night with Hawkins and Williams, but became a 40 minute player, as it became habit for him to play the entire game without a break. Younger players such as sophomore forwards Riley Payne and James Pegues, along with freshman Michael Grant all were asked to step up and play quality minutes for the team. Payne and Grant, with Wentz, Edmonson and Cooke would make up the Wildcats starting five for the majority of the second half of the season.

“We just didn’t have the depth that other teams had,” Golding said. “We had guys who were meant play role minutes for us at the beginning of the year, who are all of the sudden asked to be a starter and produce for us. Guys like Mike (Grant), Ju (Edmonson) and others really stepped up.” 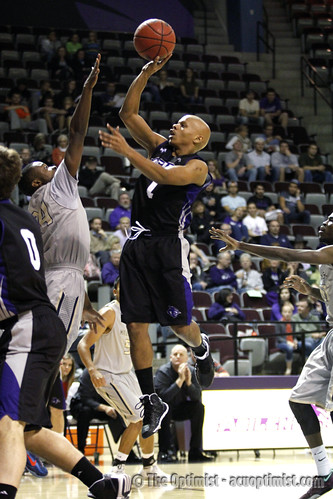 Inconsistency, along with a young core group of inexperienced players would see the Wildcats drop six of their next seven games, earning them an 8-17 record. Most of the games exhibited the same story line, the Wildcats hanging in for the first half, but running out of gas as the games drew to an end. Despite the outcomes, their toughness and drive was on display every game, especially against Texas A&M Corpus Christi.

In another comeback effort from the Wildcats, Payne was fouled and sent to the free throw line with 37 second remaining and the game tied at 68. He hit the first, but missed the second to give ACU a one point lead with 34 seconds left. TAMCC inbounded, drove to the basket and then kicked the ball out to an open man in the corner who would drain a highly contested three by Grant, to give the Islanders a two point lead. The Wildcats quickly inbounded the ball to Edmonson. In an attempt to pull off another miracle like Wentz had, he drove the lane, only to be called for an offensive foul to end the game and seal the deal on the Wildcats heartbreaking loss.

Bouncing back from the tough loss, ACU would win their next three home games, and in record setting fashion in the finale. Against Southwest Adventist, the Wildcats scored 124 points, made a school record 21 three point field goals and had six players finish in double digits. The 21 threes tied the Southland Conference record, and obliterated the Wildcats old record of 16.

The final game of the season saw yet another tough loss to swallow for ACU fans. After battling all game, the Wildcats had possession of the ball, down three with seconds remaining. Edmonson would receive the inbound and launch a three that was just off the back iron, to finalize a 56-59 loss, and an end to the Wildcats first Div. I season.

The Wildcats finished with an 11-20 record and a 2-12 Southland Conference record. With higher hopes originally planned, the team witnessed many reasons to be hopeful for in the future. For the first time in many years, the Wildcats will return the same core group of players from the previous year. Wentz has established himself as an elite shooter from beyond the arc, as he led the Southland in three point makes and percentage, and an overall offensive nightmare to opponents, Hawkins and Williams are set to return next year for their senior year, young players such as Payne and Grant will only continue to get better and a new recruiting class will look to help the Wildcats for years to come.

Although the first year was a challenging one for the Wildcats, it cannot be stated enough how difficult the move to Div. I truly is. But with the direction the team is moving in, big things can and will be expected.

“There is a lot of stuff for ACU to be excited about for their men’s basketball program,” Golding said. “We’ve got some top notch teams coming to play us here in Abilene next year. Our fans have been great and hopefully we can continue to get section F growing with students. But first we have to win. That’s our goal next year.”

Members of the Abilene community gathered together to walk across the Martin ... END_OF_DOCUMENT_TOKEN_TO_BE_REPLACED