You are here: Home / News / The road ahead: freshman adjusts to school, football team after life-threatening accident

Freshman J.R. Hall was seriously injured in a one-car accident just three days before signing with the ACU football team. He broke his neck, fractured several vertebrae near his spinal chord, suffered nerve damage and was in a coma for several days.

After spending 92 days in the hospital and being placed in a wheelchair, Hall thought his dream of college football was finished.

But Coach Ken Collums wasn’t finished with him.

Hall, a freshman undeclared major from Mesquite, now finds his home on campus. He still needs a wheelchair but is working to get back on his feet and back on the field. Despite the long recovery ahead, Collums is honoring the scholarship he offered to Hall in the spring.

“I really thought college would be a place where nobody would really care,” Hall said. “But it’s been the exact opposite.” 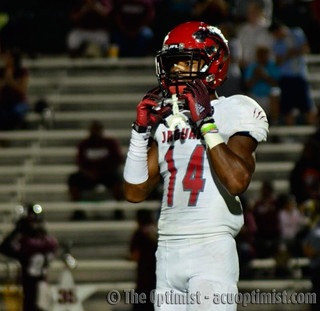 Hall played for Mesquite Horn High School before his time at ACU.

The day of Hall’s accident was like any other day. Three days before football signing day, Hall was on his way to baseball practice. He had never played until his senior year, and even the coaches were surprised he made the team.

“They told me if I was late to practice, there was a possibility I would get kicked off, so I was rushing,” Hall said.

He had to go home, get his baseball cleats and grab something to eat before practice.

Hall woke up several days later in the hospital, and his thoughts immediately went to football.

“The first thing I thought when I came back conscious was ‘Dang, I didn’t get to sign,'” Hall said. “And I couldn’t talk either, but I mouthed out the words to my mom. She read my lips and said, ‘We took care of it.'”

Hall was first team all-district his senior year and received a total of 14 scholarship offers to play safety and cornerback in college. He said after visiting the Abilene campus he felt welcomed and at home here, so he decided on ACU.

What Hall didn’t know at the time of his car accident was Collums would decide to honor the scholarship, allowing Hall the opportunity to be on the ACU football team despite the injuries.

One morning after the wreck, Hall got a text from cornerback coach Nick Smith saying he was coming by the Hall’s home. There was a knock on the door and when Hall opened it, the entire football coaching staff had arrived to talk to him about the scholarship.

“Coaches don’t usually do stuff like that – like driving two or three hours to see one person,” Hall said. “That’s when I knew I really liked these guys. Coach Collums didn’t know me but he showed grace. How many coaches would give a scholarship to a student that they didn’t know would ever walk again?”

Collums and the rest of the team have made Hall feel just as much part of the team as any other player, he said.

“J.R. is a great kid, and we’re praying for him and his family,” Collums said. “I don’t know what his future holds, but we are going to hold up our deal, even if he can’t right now. He’s such an encourager, and he has one of the most contagious smiles you’ve ever seen.”

In the days since his accident, Hall has been doing rehab and keeping a positive attitude to get back onto the field as soon as possible.

“As an athletic person, I try not to think about the transition to a wheelchair,” Hall said. “The nerves in my legs are basically regrouping right now and the plan is to return to playing next year.”

Hall said he is glad to be a part of ACU, even in the coming days of recovery.

“I feel like I would’ve been sitting at home if I had committed anywhere else,” Hall said. “I wouldn’t be getting my education right now, I wouldn’t be around the game or in the state of mind I’m in.”

Hall said he wants to tell people his story and make a positive impact on others’ lives.

“If you have a traumatic injury and are sad, I understand the feeling,” Hall said. “They tried to put me on antidepressants but I said, ‘I don’t need those, I’ll never be depressed.’ I know some injuries are different than others but you should be happy because you’re still alive and breathing.”

You are here: Home / News / The road ahead: freshman adjusts to school, football team after life-threatening accident

The Wildcats’ Western Athletic Conference tournament run and season came to a ... END_OF_DOCUMENT_TOKEN_TO_BE_REPLACED